Los Medanos running back Nic Neutall took the handoff and slammed into a wall of Blue Devils at the 1-yard line, jarring the ball loose. But the ball bounced right back to Mustangs quarterback Julius Mozee.

The Mustangs, who have a new starting quarterback and a youthful look, are eager to build on the program's positive vibe. It all starts on Sept. 6 against host Merced College. (more)

LMC’s Mustang football has certainly developed into a team to watch. Under the guidance of 3-year coach and LMC alum, Chris Shipe, the team’s performance has improved dramatically in the past few years. Three years ago, the team ended it’s season with a 1-4 game record. This year, they closed out with a 4 win-1 loss conference record, 7-4 overall to share the title of Bay Valley Conference (BVC) co-champions with Contra Costa College and Shasta College (in a three-way tie). (more)

Shawn Vasquez has always been a natural at running with a football. His high school football career was applauded. Now as a sophomore running back for the Los Medanos College football team, he has certainly been finding his groove on the field this year. (more)

In a rare occurrence, there are two Los Medanos College (LMC) alums who will face each other down for Super Bowl XLVI. Dave Tollefson, defensive lineman for the New York Giants, played for LMC during 1999 and 2000, finishing his college career playing at Northwest Missouri. Sterling Moore, defensive back for the New England Patriots, played in the Fall 2007 season for LMC and then moved on to Laney College before transferring to Southern Methodist University... (more)

Mustang Dave Tollefson played defensive end for the New York Giants during their amazing Super Bowl run which culminated in he and the Giants becoming the 2008 Super Bowl champions.

Dave came to LMC from Ygnacio Valley High School, and following his LMC stint, went on to play at Northwest Missouri State. He was drafted by the Green Bay Packers in 2006, then spent some time with the Oakland Raiders, before ending up with the Giants.

Van Boschetti, LMC's former football coach, remembers Dave was a pleasure to coach. "He was one of those rare individuals who you knew, when he matured mentally and physically, was going to be something special.  Dave always wanted to do well in whatever he did, and was passionate about football. I just knew he was destined for something great. " 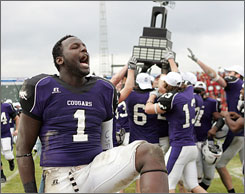