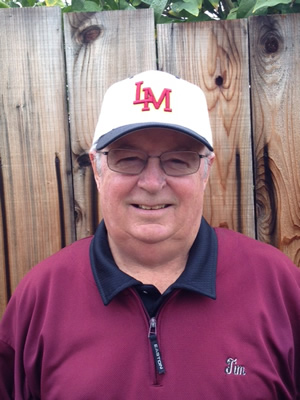 Growing up in Hibbing, Minnesota, Tim Rognlien, LMC Softball Coach, spent his winters throwing snowballs to get his arm ready for spring and summer baseball.  Tim began playing Little League at the age of 5 because his small town needed players to fill the teams.

Tim moved to Pittsburg, California when he was 12 and instantly found out about the Pittsburg Boy’s Club.  His teen years were spent at “The Club” playing baseball, basketball, flag football, boxing and anything else he could compete in.  At Pittsburg High School Tim sharpened his baseball and basketball skills.

Fast pitch softball was “huge” in the SF Bay Area and Tim joined a top notch Men’s team at age 17.   As the youngster on the team, softball expertise surrounded him and he observed and listened to improve himself mentally and physically.  He also enrolled at Diablo Valley College and played baseball during this time.  Playing ball at least 5 times a week never got old!

The U. S. Army drafted Tim after DVC and it turned out to be an opportunity to travel the world and play softball against some of the greatest civilian and military teams.  Tim even got a chance to play against “King” Eddie Feigner of the famous 4-man team, The King and His Court, on two occasions.

After a stint in the corporate world, Tim began teaching Alternative Education within the Pittsburg Unified School District.  Soon after, coaching opportunities arose and Tim began coaching girls’ softball and basketball for Pittsburg High.  After many successful years, Tim was asked to become an Assistant Coach for LMC’s Women’s Softball Team for about 5 years.  Later he became the LMC Men’s Basketball Assistant Coach for about 7 years.  Currently he spends part of his retirement as the Public Address Announcer for the LMC Women’s Basketball games.

Now beginning his fourth season (2018) as the Head Coach, Tim’s original goal to reestablish the program is well under way. Three consecutive successful BVC seasons has Los Medanos playing very competitive softball and ready to take the next step; winning the Bay Valley Conference Championship and a trip to the Northern California Playoffs. The coaching staff is ready and the players are ready to accept this challenge!