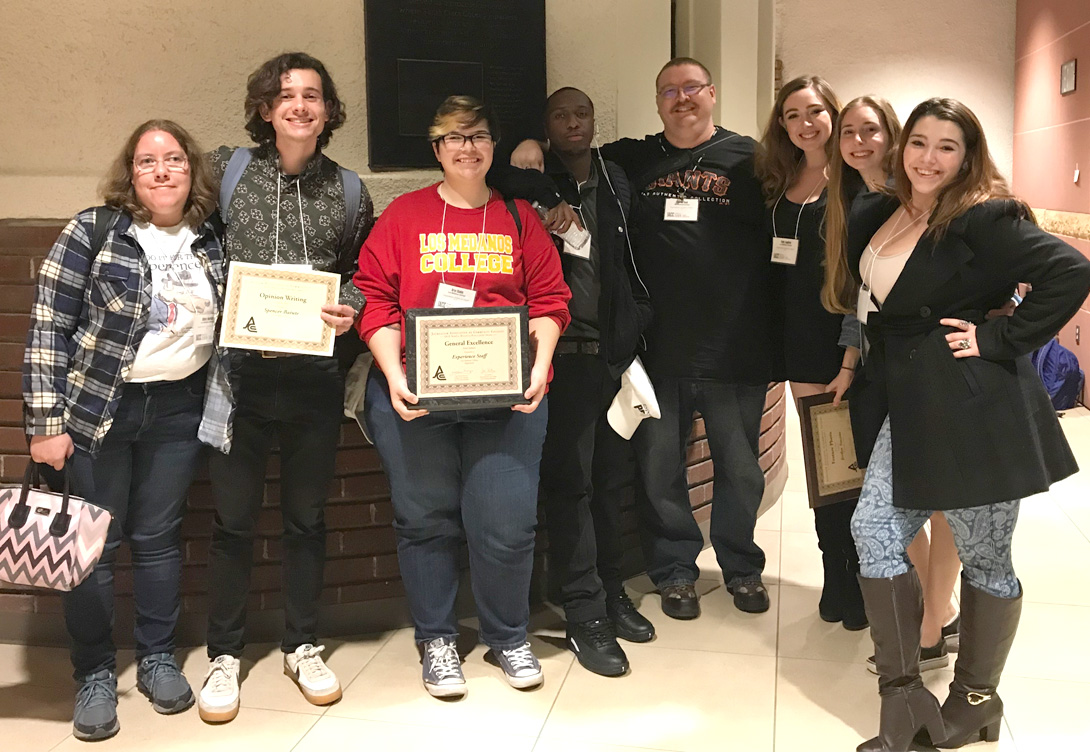 The weekly student newspaper won General Excellence in the Publications Contest for its print edition published during the 2018-19 academic year. In addition, 11 current and former staff members won awards in a variety of writing, photography and design contests.

Former Photo Editor and current correspondent Anthony Martinez won five awards, two third-place honors and three honorable mentions, for his photographic work. He won third place in Feature Photo for an image at a local coffee house, and in Photo Illustration for an image of immigrants with the flags of their countries superimposed over their faces.  He also won honorable mention in News Photo for a picture of the Young Americans For Freedom club members demolishing a segment of an anti-socialism wall they built that was inspired by the Berlin Wall; in Sports Action Photo for a picture of a baseball player sliding into base, and in Environmental Portrait for an image shot at an interesting angle of an LMC pitcher.

Former Co-Editor in Chief Perry Continente, who transferred to CSU Long Beach, won four awards for his work last year: first place in Feature Photo for an image of a duck on campus and two honorable mentions, one in News Photo for a drone shot of the lake and another in Critical Review for a review of a brewery for Oktoberfest. In addition, Continente shared first place honors with his Co-Editor in Chief Lilly Montero, who also transferred to CSU Long Beach, in the Category of Front Page Layout. Montero also won third place for a Feature Story contest entry on goat yoga.

Other Publications Contest winners include:

Students attending the annual regional conference also had the opportunity to compete in several on-the-spot contests designed to give them a tight deadline experience in producing journalistic content.

Experience adviser Cindy McGrath praised the work of the LMC student journalists who won awards at the conference, and emphasized that their pursuit and achievement of excellence continues.

“The staff is filled with dedicated and creative students, and I am proud of the work they do every week,” said McGrath. “Awards are a nice acknowledgment of their efforts, but the real prize is the experience that will prepare them for transfer to four-year schools, or for jobs as print, online or broadcast journalists when they leave LMC.”

To learn more about the journalism program visit their web page