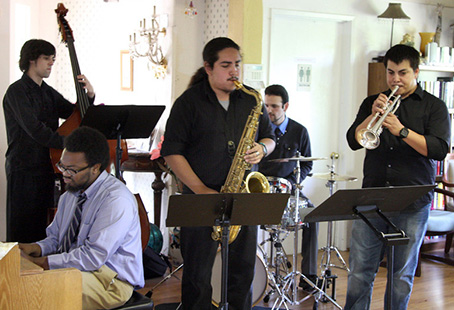 ALAMO -- Dementia and cancer have robbed John "Joel" Rusk of his ability to enjoy much of life's pleasures, but the music he loves still inspires him to smile.

Rusk, on hospice care since October and given months to live, celebrated his 85th birthday in style Tuesday, serenaded by a five-piece jazz ensemble that squeezed into the foyer of the Casa Blanca Retirement Home, filling the Spanish-style house with the sounds of Dixieland.

Rusk, born in Finland and a longtime resident of Antioch, was a saxophone player in his younger days and during the 1980s served as president of the East Bay Traditional Jazz Society.

According to his wife Estrella, 64, jazz has always been her husband's passion. Before his health problems, she saidï»¿, the couple went to festivals throughout the year. Hearing the music again, she said, helps him remember his youth.

"It calms his nerves and lifts his spirits," Estrella Rusk said. "Every time he hears the sax ... you will see a smile on his face."

Though he can no longer play the saxophone, Rusk can manage a simple tune on the harmonica. At his birthday bash, he was presented with a brand new harmonica, which he used to play along with the band to the Duke Ellington standard "In A Sentimental Mood."

His belated jazz-themed birthday, complete with a cake topped by musical notes, was made possible by the An Elderly Wish Foundation, an Antioch nonprofit that -- similar to the Make-A-Wish Foundation for children -- grants wishes to seniors 60 and over in Contra Costa County who have a terminal or life-threatening illness.

Former Pittsburg resident Rebecca Crowder founded the organization in 2000, granting the first wish to her mother Elizabeth McWhorter, who got to play the slots one more time in Reno. Crowder then used inheritance money to fulfill more wishes, and An Elderly Wish was born.

Mary Chapman, the foundation's executive director, has been with the group from almost the beginning, and said she gets a reward out of bringing smiles to seniors faced with life-threatening illnesses and seeing the joy it brings to their families.

"If we're doing it for children, why can't we do it for seniors? They're kids at heart," she said. "We can still do something to make them happy. That's why we do what we do."

Since its inception, An Elderly Wish has granted 130 wishes, ranging from the extravagant -- Alaskan cruises, a Hawaiian vacation and limo rides -- to the simple, like setting up a Skype meeting between sisters who hadn't seen each other in 13 years and fulfilling a man's wish of fishing in the San Joaquin Delta one last time.

To grant Rusk's wish, Chapman contacted Los Medanos College in Pittsburg looking for a saxophone player. Music student Isaac Fematt eagerly responded and called his friends to form a full jazz quintet for Rusk's special day.
"I just think it's amazing," Fematt said. "We just all feel honored to play for someone who really appreciates it, especially somebody in his condition."

While there are numerous wish-granting groups in the country for children, only a few serve the elderly, such as the Dream Foundation in Santa Barbara, and the S.H.O.W. (Seniors Having One Wish) Foundation, in Murrieta. Fewer deal only with terminally ill seniors, among them the Bucket List Foundation in Arizona.

One of the largest national wish-granting organizations, Wish of A Lifetime, was founded by Olympic skier and former NFL football player Jeremy Bloom, who lives in San Francisco. Since 2008, the group has made more than 550 wishes come true for seniors in 45 states.

"Ultimately, our goal is to change the way society views aging, and we do that through granting lifelong wishes to deserving seniors who have given so much for our freedoms," George Bogdewiecz, CEO of Wish of a Lifetime said via email.

"We're lucky if we get one application a month," Chapman said.
At Casa Blanca, as Rusk played along with the band, the grin obvious on his face, it was clear the group's 131st wish was another successful event.

"This is one more birthday for him," Chapman said, "Hopefully we've made it a very happy one."