By Roni Gehlke For the Contra Costa Times 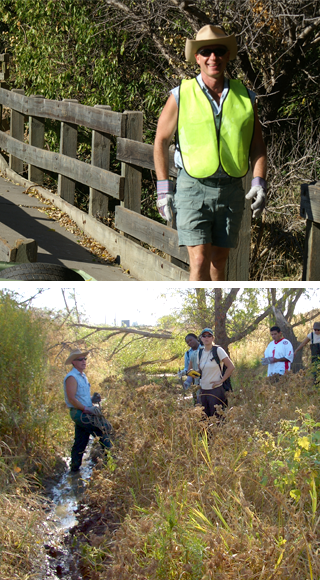 Offering a "service learning" approach to teaching has long been a practice of Los Medanos College chemistry Professor Mitch Schweickert.

In the early 2000s a friend approached Schweickert to work with a group to develop the Kirker Creek Watershed plan. This opened the door to introduce his students to a real-life example of their studies.

The plan took three years to complete and now offers a place where students can continue studies by testing waters and develop a GPS mapping project. The experience also offered a foray into the environmental sciences for Schweickert, who now runs Los Medanos College's small ecology sciences department.

"I really believe that it is important to get the students out of the lab and working in outdoor activities," Schweickert said.

Schweickert began working for Los Medanos College in 1979 as a chemistry professor. While chemistry has been his main study, he has always been interested in ecology. He has long been a member of the Sierra Club and has spent countless hours volunteering for the local chapter.

As soon as Schweickert began working at Los Medanos College, he became involved in collaborating with the staff at Dow Chemical Co. in Pittsburg. As part of the community advisory panel for Dow, Schweickert helped in forming the Dow Wetlands Preserve in Antioch, which opened in 1989.

Today, as a part of the 30-member community advisory panel, which also includes Dow employees, retirees and other community members, Schweickert helps to determine the enhancements and restoration efforts on the site.

"Dow's wetlands program is outstanding," he said. "The site gives students a chance to see firsthand the ecology of the Delta."

During his time on the Dow Wetlands project, Schweickert has seen the eagerness of the teachers and the students who come to visit the preserve.

In his efforts, Schweickert meets once a week to plant native plants and take out invasive species. The group is continuing to build the existing trail all the way to the Antioch Marina park site. Schweickert also brings his students out to the Dow property to work with invasive species and do water quality testing, which is yet another example of his service learning teaching style.

Schweickert was raised in Livermore where his father also worked in the chemistry field. He moved to Pittsburg in 1981 once he became settled in his job at Los Medanos College.