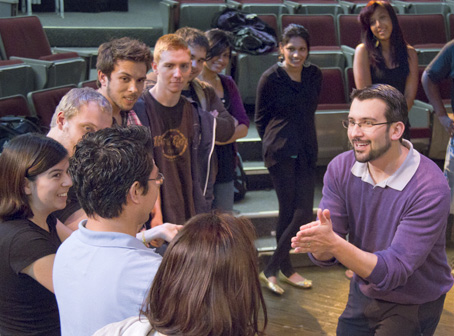 It was love at first sight, and Nick Garcia has been devoted to the relationship ever since.

Garcia was named drama department chair at Los Medanos College in 2009, and "I have been working tirelessly to build the program ever since."

He ventured from Iowa, where he ran the George Daily Theatre, and said the move was sparked to "escape the weather."

"I flew (to LMC) twice for a series of interviews and instantly fell in love with the campus and community. LMC is one of the most diverse campuses I have ever been to and I knew that this was the place for me."

Garcia has an extensive background in teaching, acting, director and designing. According to LMC's site, he has performed, directed and designed for venues like the National Conservatory Theatre Center in San Francisco. He has also designed curriculum for multiple children's theaters across the country and was nominated for the Outstanding Teacher of the Year by the University of Iowa.

Once he hit the Pittsburg campus, it didn't seem to take him long to win over this student body, either. A year after he began, he was named Student Club Adviser of the Year.

His first goal at the campus was to increase performance opportunities.

"We tripled the number of productions each season and revamped the entire curriculum in order to optimize the training of students ... Once each course was rewritten and focused, the Theatre Arts and Associates in Acting degrees were constructed."

Garcia also spends much of his time advising students in the drama and improv clubs and the college's Transfer Academy.

And, future stars can thank Garcia for creating an AA Degree in Acting and an Associate Degree for Transfer in Theater Arts.

Despite his long list of duties, Garcia said his vision is for the "drama program to be one of the premiere programs in the country.

"Students going to community colleges often feel discouraged because they are not at a university. This should not be the case."

He plans to "invigorate the arts by celebrating the diversity of the LMC student body and create a premiere program geared toward student success."

As proof of this, he said this year: "We were able to secure nine full-ride scholarships for our students transferring out of our program. I would like every transferring student to pursue their academic dreams with financial support."

The department's lists of offerings is ample, producing four main stage productions, a New Play Festival (consisting of about 15-20 new works), and numerous children's shows, which are performed for free for the children from the school's Child Studies Center.

Waiting in the wings is Martin McDonagh's "The Cripple of Inishmaan" in April and the festival in May.

Garcia grew up in Southern California and Colorado, and always knew he wanted to act, but didn't fall for theater until college.

"Since then, I have never stopped working in the field."

The arts are clearly important to Garcia.

"The arts and athletics in many ways are the community aspect of the college. These are the elements that bring the community to college and help bridge the gap between the two.

"The arts are also a celebration and study of what makes us human and connects each of us to one another. It also offers additional avenues for success for the students entering the campus looking for their passion.

To learn more about the drama program at LMC please visit the Drama website.