Article that appeared in the Contra Costa Times 2/16/2014 By Paul Burgarino pburgarino@bayareanewsgroup.com 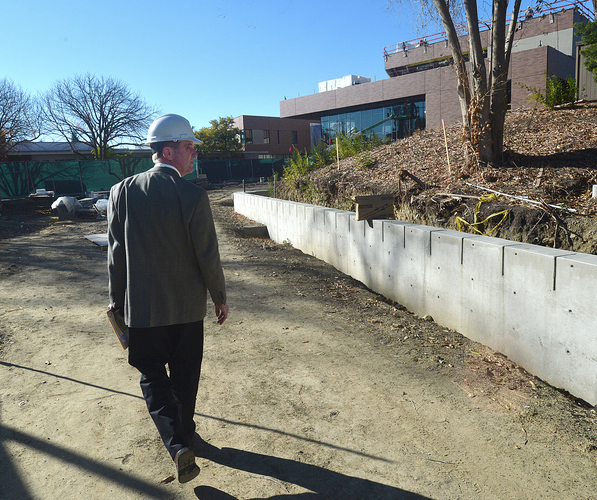 PLEASANT HILL -- It may be hard for some to picture Diablo Valley College with a large common area and gateway entrance. After all, the center of campus has been little pockets of concrete and patches of grass for decades.

But, like the other Contra Costa community colleges, it will soon have a new look, as roughly $145 million in construction projects are in various stages of completion at the three main campuses.

Work is in the latter stages at Pittsburg's Los Medanos College and will pick up with greater intensity this spring at Contra Costa College in San Pablo.

Meanwhile, DVC is smack dab in the middle of its face-lift.

The projects, which are aimed at modernizing aging buildings, improving accessibility and energy efficiency and improving classroom technology so it meets the needs of students studying tech careers, are mainly funded by a 2006 voter-approved $286.5 million bond measure.

Those two buildings will be connected by an enclosed, aboveground pathway.

The old cafeteria, which dates back to 1955, will be demolished once that construction is finished.

DVC president Peter Garcia said that, in many cases, the campus buildings have outlived their effectiveness and it costs a lot to refurbish them.

"We've squeezed a lot of life out of them. The construction will raise the facilities to the level of programs we have. It's incredibly exciting," he said.

Pyle said the location of the DVC buildings also helps "to connect the disconnected spaces" the campus used to have in its center and creates a large common area.

Unlike some past construction that was done one building at a time, particularly at DVC and CCC, these projects are part of comprehensive master plans, meaning there is a unified design, Pyle said.

Work is just starting on a similar makeover at CCC.

During a recent site tour, CCC President Denise Noldon pointed out how the campus has already changed with the completion of some projects such as remodels of the library, music and Applied Arts buildings. The new projects will expand upon that.

"It's going to change the whole face of the college," said Noldon, adding her hope is that the new vibe of the campus further enhance its instruction, programs and services and boost enrollment.

The series of projects is expected to be complete by fall 2016.

LMC, the youngest of the three campuses, has been in the midst of construction to its main building since late 2010, including completion of a new facility for its Nursing and Emergency Medical Services program. Also new on that campus in the past few years are a library, math and science buildings, which came from an earlier $120 million districtwide bond measure that was approved in 2002.

As is the case with most projects, there have been some grumblings from students and faculty about the inconvenience of campus detours and lack of parking because of the construction. However, officials say most people are excited, especially as they see new projects come to fruition.

"I think people get it. They realize that its an investment in future generations of students, so they've just kind of toughened up," Garcia said.

Doing work: Here is a brief update on where recent construction stands at each Contra Costa community college. Los Medanos College: Work continues on the Student Services and Administration area on the third and fourth levels of the college complex. Expected completion date is December 2014. Diablo Valley College: The new student service building was completed last fall. Construction continues on a new cafeteria building, which is expected to be done in early summer. The old cafeteria will be demolished over the summer. Contra Costa College: Some athletic field work to meet Americans with Disabilities Act standards was added recently, along with two new high-voltage switch gear units. The student life and cafeteria complex will be demolished over winter break or early 2014. After that, work will start on the liberal art, student life and administration buildings. The estimated completion date is late 2016. Source: Contra Costa Community College District