Video of the Mass Casualty Simulation at Los Medanos College

PITTSBURG — At 9 a.m., students in the nursing and paramedic programs at Los Medanos College were informed that an active shooter had been taken down by police, but not before killing and injuring multiple victims.

It was a simulation, but many students' nerves were on edge for real.

I'm scared and a bit nervous to see what the affected people will come in with," said Sheela Bakhsh, a senior in the college's nursing program. "This is our first time, and we've never experienced anything like this before. I want them all to be safe."

The mass casualty simulation was the second time the two departments had to work together to rescue, triage and treat patients as a team. 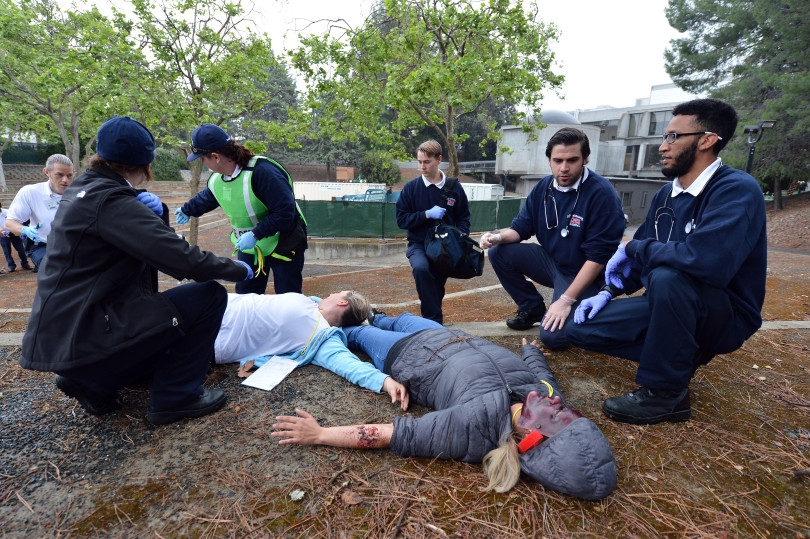 Faculty in the registered nurse, police services and emergency medical technician programs, as well as LMC's fire academy, wanted to test their students before sending them out into the world where a real event such as this could happen.

For some students, Monday's school shooting at North Park Elementary School in San Bernardino was a reminder that these types of events aren't as uncommon as they would like.

"It is serious. In real life, this is probably going to be even more stressful, but it's a good beginning," said Olga Shvaleva, an LMC nursing student.

While there was an initial miscommunication at the start of the simulation, EMS students found their way to the site where the shooter had taken a number of victims and began triage on them.

Students covered in fake blood or wearing fake arms with burns and injuries on them wandered around the quad, wailing. The ones that weren't shouting were the most concerning. Overall, there were two deaths, a cardiac arrest, an amputated limb, numerous burns and instances of traumatic brain injury and a child born seven weeks early. 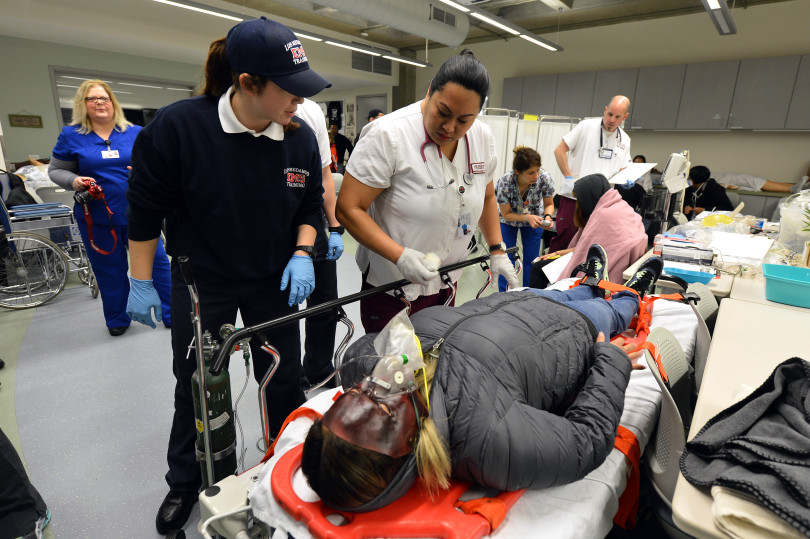 Kaitlyn Vaught, left, a student in the EMT program at Los Medanos College, and nursing program student Kristynn Aquino tend to "burn victim" Moreen Redita, also a nursing student, during a training exercise at the college in Pittsburg, Calif. on Wednesday. The exercise, which simulated an on-campus shooting and explosion, provided an opportunity for students to test their emergency response skills. (Kristopher Skinner/Bay Area News Group)

Just as the EMTs were taking in the most critically injured patients, first responders were told of an explosion from a pipe bomb that the shooter had placed earlier. A team split off to assess the incident while a group remained behind to care for the casualties from the shooting.

Nursing student Kristen Lee wandered around asking about her missing dog, while EMS student Havea Lasike tried to calm Lee down and read her vital signs.

"This is very typical in our line of work, where a secondary event happens near where the initial event occurred," said Mike Hotton, traffic officer for the college's police services. Hotton also took on the role of incident commander for Wednesday's simulation. "We need to train perfectly, so we can act perfectly."

EMS students Josh Marchio and Taylor King huddled together with other students near the area of the explosion after the simulation had ended.

"We should have been more coordinated," Marchio said. "We got messed up staying coordinated, but it's good to get the practice here."

King agreed, adding that it's better to make the mistakes here than when a real disaster presents itself.

LMC nursing faculty member Julie O'Brien was one of several staff members to organize the event, after seeing the success of the "Every 15 Minutes" program that teaches teens about drinking or texting while driving through a simulated car crash. The premise of the program, which began in 1995, was that every 15 minutes, a person dies in an alcohol-related car crash. Since the program started, the rate of alcohol-related deaths has gone down to one every 56.5 minutes in 2015.