The science which deals with the natural laws governing the production and distribution of valuable goods and services.

Economics is the study of how societies allocate their available resources to meet human needs. LMC offers microeconomics and macroeconomics. 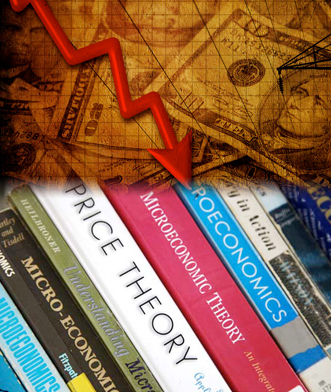 Microeconomics is generally the study of individuals and business decisions, macroeconomics looks at higher up country and government decisions. Macroeconomics and microeconomics, and their wide array of underlying concepts, have been the subject of a great deal of writings. The field of study is vast; here is a brief summary of what each covers:

Microeconomics is the study of decisions that people and businesses make regarding the allocation of resources and prices of goods and services. This means also taking into account taxes and regulations created by governments. Microeconomics focuses on supply and demand and other forces that determine the price levels seen in the economy. For example, microeconomics would look at how a specific company could maximize it's production and capacity so it could lower prices and better compete in its industry.

Macroeconomics, on the other hand, is the field of economics that studies the behavior of the economy as a whole and not just on specific companies, but entire industries and economies. This looks at economy-wide phenomena, such as Gross National Product (GDP) and how it is affected by changes in unemployment, national income, rate of growth, and price levels. For example, macroeconomics would look at how an increase/decrease in net exports would affect a nation's capital account or how GDP would be affected by unemployment rate.

While these two studies of economics appear to be different, they are actually interdependent and complement one another since there are many overlapping issues between the two fields. For example, increased inflation (macro effect) would cause the price of raw materials to increase for companies and in turn affect the end product's price charged to the public.